Ginger is one of the oldest and most widely used condiments in the world, and it is thought to originate in on the subcontinent of India due to the wide genetic variations that are present there.

It is used throughout the world for flavoring in a variety of dishes and medicinal use and is also a key ingredient in our Detox Organics supplement.

Click here to read more about the Adrenal Fatigue Diet

While the current name for ginger originates in the 14th century from the Middle English word “gingivere,” the root itself has been used for over 5000 years by India and China as a tonic to treat a variety of ailments.

It grew in popularity as it was exported from India, who is now the world’s largest producer, to the Roman Empire and then continued to spread and gain in popularity from there.

Throughout the centuries ginger has been used in the treatment of ailments, from colds to cancers, but it wasn’t until recently that we have been able to study the actual effects of ginger and whether or not these claims held any value. And as it turns out, there may be something to these allegations.

Upon closer study, ginger has been shown to decrease age-related oxidative stress markers and guard against ethanol-induced liver damage by in rats treated with ethanol by suppressing oxidative consequences.

The high levels of antioxidant found in ginger can be attributed to the presence of polyphenol, which is known to play a role in preventing degenerative diseases such as cancer and cardiovascular disease.

One of the biggest reported health benefits of ginger throughout the centuries its ability to help with inflammation, swelling, and pain. Studies show that ginger does indeed exhibit anti-inflammatory benefits and is also suggested to be beneficial against osteoporosis and rheumatism.

Click here to read more about how to reduce inflammation

In human studies, patients suffering from osteoarthritis shows a positive response to the treatment of ginger extract, in comparison to the control group. Those who have rheumatoid arthritis and muscular discomfort saw a reduction in swelling and pain relief when using powdered ginger as a dietary supplement.

The anti-cancer properties of ginger are often attributed its high antioxidant levels found in polyphenol. One study conducted on mice showed that ginger could inhibit tumor promotion in the skin.

In human studies, ginger has demonstrated that it can suppress the proliferation of cancer cells through the process of apoptosis, or programmed cell death.

Other Health Benefits of Ginger

It is often recommended to treat seasickness and has been proven to be more effective than the traditional over the counter medication, Dramamine.

It has also been recommended for people suffering from vomiting and nausea caused by motion sickness, pregnancy, chemotherapy, and surgical procedures.

Randomized tests and surveys show that while supplementation is low among pregnant women to prevent nausea, it is highly efficient and safe to use during pregnancy and has relatively no side effects.

Another use of ginger is to treat asthma and other respiratory illnesses since it is an anti-inflammatory.

How to Use Ginger 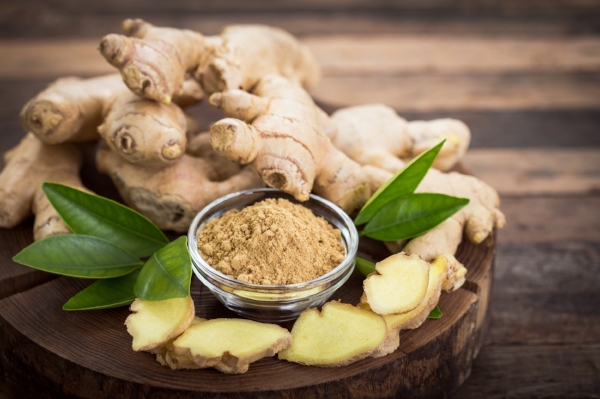 Throughout its extensive history, there have been many ways that ginger has been used and consumed, both in the use of foods and medicinal purposes.

There are many ways that ginger is consumed and used within the food. It can be eaten fresh, dried, pickled, preserved, crystallized, candied, powdered, ground, or juiced.

Although this root is used widely throughout the world and in many different dishes for flavor, alone, it can have a rather strong taste and is sweet, peppery and spicy.

Of course, you can always consume ginger root in supplement form, such as a ginger capsule or through a superfood supplement like Detox Organics.

This superfood is proven to help keep you healthy and even treat minor pains and ailments that you are afflicted with.